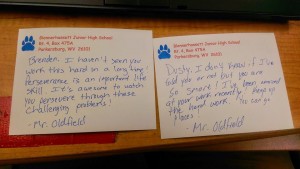 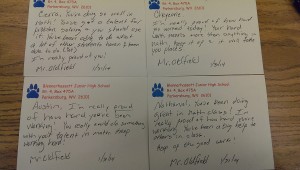 I adopted the practice of writing handwritten notes about 3 years ago.  It wasn’t until this year that I really began to harness the power.  Before, I would occasionally write a note when a student performed extraordinary in class.  If I recognized that a student had overcome a large obstacle in content, I would try and write the note and deliver it within the same day.  At my previous school, we had Blennerhassett Middle School post cards that you see in the above picture.  I moved schools this year and realized that as far as I knew, I didn’t have anything similarly suited for writing handwritten notes to students.  I have used Vistaprint this year to order business cards that include my contact information, website, and instructions on signing up for my Remind class.  On the back of the card, I included a motivational image from Dave and Shelly Burgess, authors of Teach Like A Pirate. 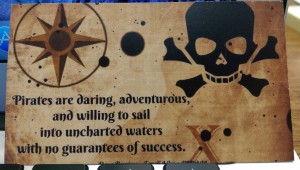 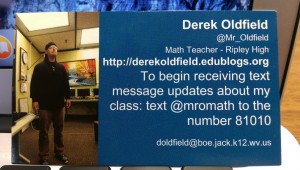 In addition to ordering the business cards, I also ordered postcards for handwritten notes. 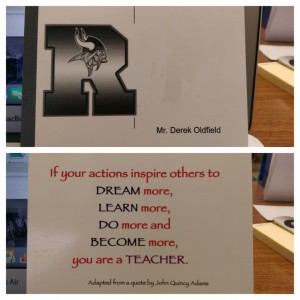 This year I determined to leverage the power of a sincere note to a greater degree than I had before.  During the first few days of school, I made literal and mental notes about students through observation and conversation.  I tried to identify students who seemed disengaged.  In some cases, I have students who are repeating the course for a second of third time.  As I identified those students, I watched closely for that small spark of excitement, engagement, or some input to any conversation.  That was when I jumped on the opportunity to praise!  As soon as I could I wrote a handwritten note, checked out their schedule, and began delivering the notes during my planning period.  In four days of school I have delivered four quality notes with a sincere and personal message to that student.  I ordered my Vistaprint cards late so I had to use notecards for a few days. 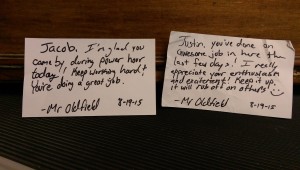 Often the only feedback you get from a handwritten note is the evidence of excitement, motivation, and engagement that student displays the next day in class.  Occasionally you’ll get a “thank you” in return.

A couple years ago I had a student that many educators would have considered a handful, to say the least.  During our team plan, this student’s name would come up often when discussing behavior issues.  This student was among the top five offenders in detention-hall that year.  I wrote him a handwritten note praising him for his perseverance during an exercise in class one day.  A few days later I noticed his binder laying on the floor next to his desk.  In the clear plastic sleeve on the front of his binder was my handwritten note.  He was displaying it proudly for all to see.  I didn’t want him to notice, but I tried to quickly snap a picture of that binder that day.  The image isn’t real clear but that’s my handwritten note in the sleeve. 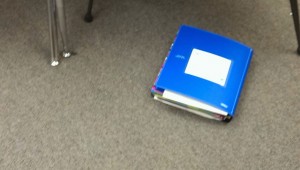 He never thanked me for my note.  I got all the thanks I needed when this student worked his butt off in my class the rest of the year.