Jonas made it’s mark on West Virginia this weekend.  In Parkersburg, WV we got about 13 inches of snow.  On Friday as the snow was dropping my family decided to drive about 20 minutes north to my aunt and uncle’s house because they have a fantastic hill for sleigh riding. 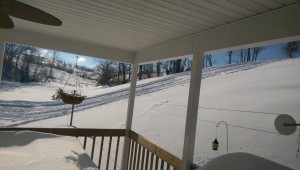 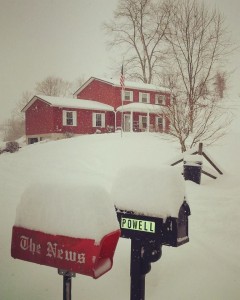 It turns out we got snowed in and the roads were just too much for our Ford Fusion to travel so we decided to spend the night Friday.  Jonas continued to pour into Saturday so we were forced to stay another night away from home.  My aunt and uncle were keeping their eight-year-old granddaughter Kiera for the weekend so my four-year-old daughter Miley had a playmate.  As you can imagine, this was an excellent deal for Miley.  As she was climbing into bed with Kiera Friday night she told us “this is my first big girl sleepover!”

I brought my Macbook Air with me as I figured I could use the time stuck inside to get some work done.  I got it out Saturday afternoon and attempted to access the wireless internet available at my uncle’s home.  For reasons unknown to me, my Macbook would not connect despite entering the correct password.  It appeared to try to connect over and over but I never received the typical message telling me it was unable to connect.  I honestly don’t know what happened and the issue exceeded my own level of expertise.  My eight-year-old cousin Kiera noticed my frustration and asked me what was wrong.  I told her my computer wouldn’t connect to the internet.  She asked if I wanted her to try.  I smiled politely under the guise of frustration.  I had reached the point where I just wanted to toss something out the window.  Kiera asked me again if I wanted her to try so this time I took a deep breath and kindly said “Kiera, I’ve tried to input the wifi password correctly, but it still won’t connect.”  Do you know what Kiera did?  Kiera grabbed her Ipod Touch and proceeded to ask Siri how to fix my Macbook.

Sunday morning my family got up and I told my wife Julie that we should begin packing our stuff and heading home.  I was certain that by this time the hill leading into our neighborhood would likely be cleared enough for us to make it.  Kiera and Miley were determined they were going to eat ice cream for breakfast.  It was a weekend long party for these two!  Kiera told us she wanted to make ice cream with snow.  Do you know she did?  She grabbed the Ipad and looked up a recipe on Youtube.  Within 30 seconds we had a recipe for making ice cream with snow.  Outside we went with a couple bowls to scoop up some snow. 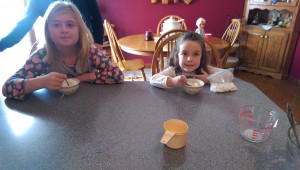 It wasn’t until we got home Sunday afternoon till I started thinking about what my eight-year-old cousin had taught me.  I considered how Kiera so quickly attempted to learn the things she wanted to learn using Siri and Youtube.  I had the opportunity to observe how an eight-year-old leverages technology that is as ubiquitous to her as a pencil is to me.  In fact, as I replayed the situations in my mind I realized she didn’t even think twice about seeking a solution from Siri or about searching for a recipe on Youtube.  What implications does that kind of access have on today’s classrooms?  Consider your own classroom, is it engaging to today’s students?  Is there still a disconnect between the way students learn outside of school and the way students learn inside of school?