I’ve been blessed with some opportunities to speak and write about prevention.  It’s true, the best classroom management strategies are founded on prevention.  Stop the behavior before it starts.  I fully endorse the writing of handwritten notes.  I’ve blogged and spoke a lot about my 3-pronged approach during the first week of school.  Seek out those tough kids like a shark.  Find something positive during the first week of school.  Recognize it publicly, write a handwritten note, make a phone call home, hold a short conversation somewhere outside the classroom, etc.  There are a number of ways you can make positive contacts with tough kids during the first week of school.  The entire philosophy of SAMS and COSTCO are built on positive touches with customers.  Research suggests that it takes 7 positive contacts for a customer to return.  This post is intended to provide support to those teachers who may or may not have done that, but still have to deal with what we all may face: I still had to discipline that kid.  I would never advocate against the use of discipline.  I’m a big supporter of restorative practices, but I know in all schools, we still have to support teachers who had to utilize a form of discipline.  In the case where we’ve invested a lot of time and energy into a student, it can be a real challenge to recover a relationship once we’ve had to resort to a form of discipline.

So let me lay out a common scenario: Jared was a tough student last year so you anticipated him being a tough student this year when you noticed him show up on your roster over the summer.  You invested in positive tools that seemed to yield some effective response in Jared.  He seems to be putting forth more effort for you in your class.  The investment you made in connecting with Jared’s heart seems to have paid off.  For some unknown reason (there’s almost always a reason, recognize the feedback), Jared has a terrible day in your class.  Perhaps he even has another terrible day tomorrow.  Whatever the case may be, you have to report Jared to administration and schedule a meeting.  Know this, despite the magnitude of your efforts to turn Jared around early in the year, the relationship between you and Jared is damaged.  That’s not to say you did anything wrong.  That’s not an indictment on your use of discipline.  It’s just a fact.  The relationship is surely to be damaged.  It’s irresponsible for us to expect Jared to return to our class with a renewed spirit, ready to reengage in learning with a respectful attitude.  That would be nice wouldn’t it?  See, some kids may do that.  I’m not talking about those kids.  If you’re reading this and can’t seem to recognize which kids I’m talking about, consider yourself fortunate to have worked with a different kind of student.

In my position as an administrator, I’ve had the privilege of working with teachers and spending time in other classrooms.  I didn’t have these opportunities as a classroom teacher.  Since then, I’ve noticed that a lot of teachers may make an effort to invest in preventative strategies, but a lot of teachers still struggle when it comes to recovering, renewing, and restoring a relationship that may be damaged after discipline occurs.  I created the following strategy to help inspire and guide teachers in restoring positive relationships with kids. 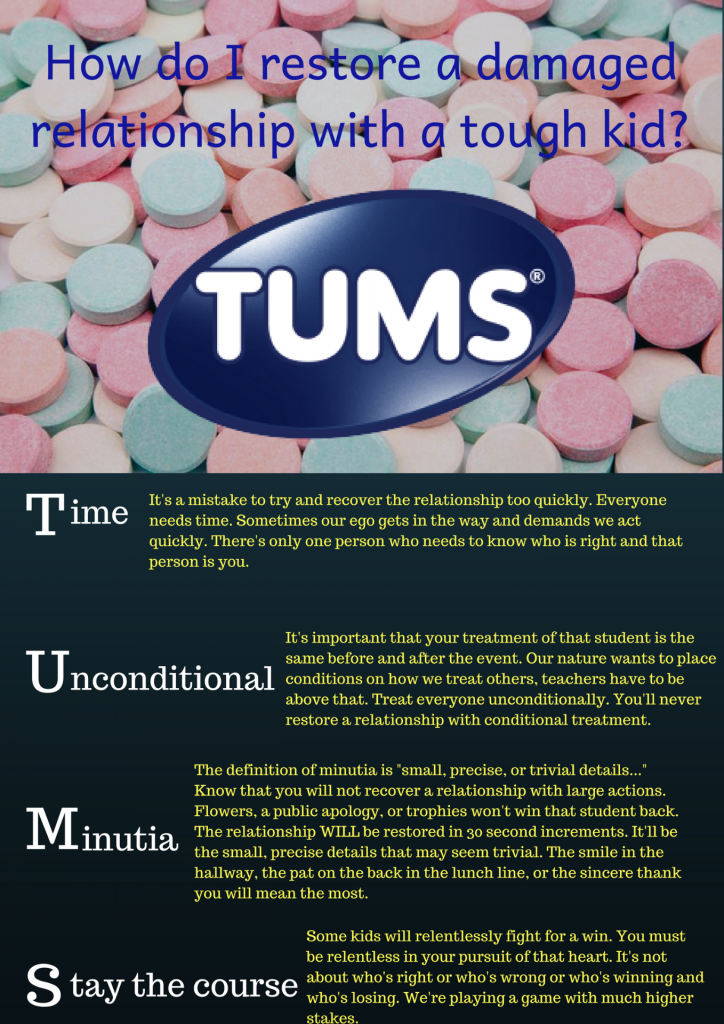 One thought on “I had to discipline, now how do I recover the relationship?”